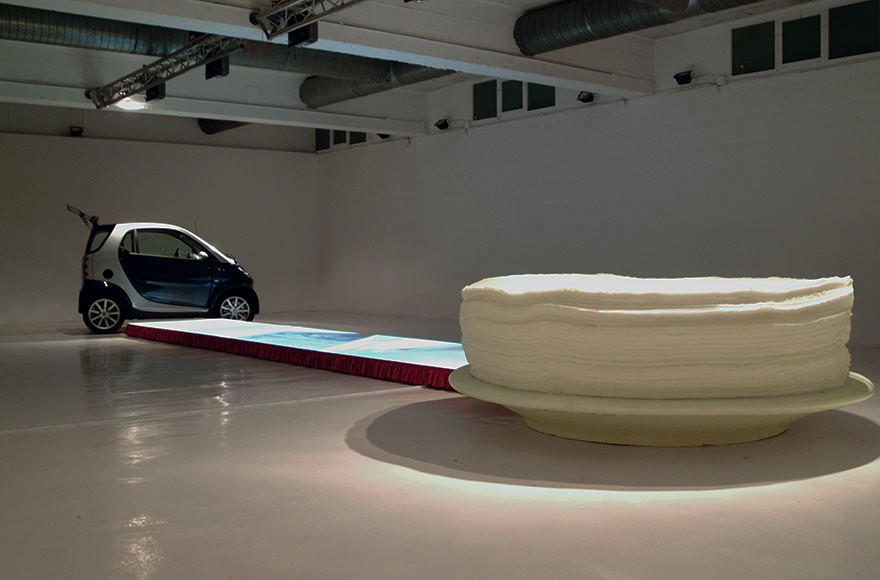 Ninety-minute video (16:3 format), projected onto a 7 m stage. A large cotton wool pad on a saucer, a portable radio, a Smart car with built-in loud­speakers and four projec­tors. The English dialogue is spoken by two speakers. Book­lets in English, Catalan and Spanish are avail­able. Between an over­sized cotton wool pad on a saucer with a diam­eter of 250 cm and a Smart car runs a low stage encir­cled by a red curtain. The cotton wool pad talks to the Smart via a radio next to it; in turn the Smart commu­ni­cates via the built-in speakers. Four synchro­nised projec­tors project a 90-minute video onto the surface of the low stage. The video illus­trates the chat between the Smart and the cotton wool pad. The loca­tion of the recorded conver­sa­tion is a restau­rant car on a train. The view out of the window of the restau­rant car shows the land­scape rolling by as well as inserted film sequences commenting on the spoken text: a drive through a shop­ping street, a brass band in front of a depart­ment store, a pan through an amuse­ment park, façades of town houses, etc. The two char­ac­ters sit together in a stage-like situ­a­tion talking about their lives. It is a long and freely devel­oping conver­sa­tion. And because neither of them sees their exis­tence as some­thing removed from society, the personal conver­sa­tion also forms a reflec­tion of our present times. The two char­ac­ters are oppo­sites. They are not exotic. They are modern types, illus­trated by a Smart which, more than any other car, expresses the feeling of being alive today, and a cotton wool pad typi­cally used for removing make-up and for facial cleansing. The cotton wool pad lies in a saucer and, with its diam­eter of 250 cm and table height, it is extremely over­sized. Unlike driving a car, personal hygiene is an inti­mate matter. Thus the cotton wool pad repre­sents a different view of things and it asks different ques­tions than the car. The video dialogues are taken from conver­sa­tions which the artist himself has had with strangers on trains, in restau­rants and in other public places or conver­sa­tions he has heard and recorded.