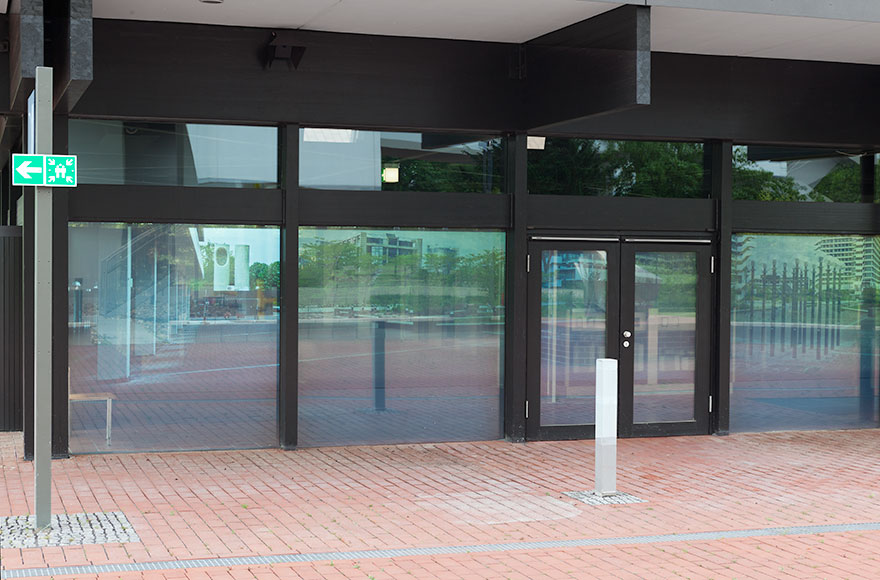 The prop­erty with the two striking Cross-Build­ings is a place that expresses the polit­ical culture of its era in all its aspects. It marks the begin­ning of the govern­ment district planned in 1967 after the reser­va­tion of the provi­sional federal capital of Bonn was annulled. The polit­ical and cultural will of the Bonn Republic can still be seen today in the ensemble of archi­tec­ture, land­scape design and art. From its initial construc­tion, the site’s concept included numerous works of art for all levels of the exte­rior as well as inte­rior. It is the inter­ac­tion of the land­scaped open spaces with artworks and archi­tec­ture that gives the prop­erty its very partic­ular quality.

The objec­tive this project was to high­light this inter­ac­tion, to redis­cover the concept of the prop­erty and its existing works of art from that time. To this end, six adja­cent panes of the facade are exchanged for special projec­tion glass. Images are projected onto these panes which, because there is no visible image carrier, appear as actual reflec­tions of their imme­diate surround­ings. The projec­tions feature different views of the site and the coex­is­tence of the various artworks in that archi­tec­tural envi­ron­ment. Because the design language of the site is uniform and the projected image is not so different from the actual reality behind the viewer, the virtual trans­port of the image from one end of the prop­erty to the window is not at first evident. In addi­tion, the projected image over­laps with the pane’s ability to mirror the viewer standing before it – that is, to inte­grate the viewer into the image. And upon nearing the pane, its mirrored content begins to overlap with the view into the inte­rior, creating a discrete, yet richly multi­lay­ered illu­sion that sits at the periphery of one’s attention.

The goal is not to deceive, but to create an image that is cred­ible yet also works as a narra­tive. By exchanging the natural glass reflec­tion in a sequence of projec­tions, a virtual journey across the site can be under­taken. An image archive of the entire site was created, which runs auto­mat­i­cally with a change of one image per day. Addi­tion­ally, an inter­ac­tive control is built in, allowing one to navi­gate this image archive by hand move­ment, thus taking an indi­vidual virtual tour of the site at will. Using a camera-supported gesture control func­tion, the images on the facade can be scrolled further by arm movements.